It was immediately after the Kristallnacht in Vienna, in 1938, that Jewish men were rounded up by the Gestapo and taken away. My father, Emil Tennenbaum, was 35 years old, my mother, Dora, 25. My brother, George, was only an infant and I was two. Dad was taken to Dachau concentration camp.

A short time thereafter, our apartment was bolted shut by a Nazi authority. Being without food, drink, clothes or diapers for her babies, my mother ran across Vienna with us in the baby carriage to my Aunt Mira’s house where we remained.

Before the start of WWII, the Nazi regime’s goal was simply “Judenrein” (the cleansing of Jews from the country), so my father was let out of Dachau after a month and a half by signing a pledge to leave Austria immediately. With a forged passport claiming that he was a Dutch Protestant, he made his way to a hiding place in Antwerp.

American cousins signed affidavits, our family had obtained visas under the U.S.’s 100,000 quota and many mini-dramas, paper hassles, and hardships ensued. My mother fled to Italy with my brother and me. We arrived in Venice, disoriented, unable to communicate in Italian, without lodging and with just a few lira given to my mother by a kindly Italian man who took pity on this 26-year-old refugee with two babies.

We left to the United States from Genoa on the Italian liner, “Rex,” arriving November 9, 1939, three days short of my third birthday. Once in New York, George and I were put into a children’s shelter, since my mother had no job or language skills. This separation from my parents and my little brother was the most wrenching experience, and I remember it as if it has happened last year. My father was reunited with us a year later. We were a somewhat scarred family, but lucky to have left Europe just in time to avoid being caught up in the Holocaust.

The most important time to me, growing up in Boston and New York, was my education at the High School of Music and Art. I also became part of a small group of student activists at the University of Alabama in 1956, working to desegregate the school in the earliest days of the Civil Rights movement. In 1957, I taught art in the elementary schools in New Brunswick, New Jersey; my three children, Dan, Shari and Alissa were born there. In 1975, I married Dr. Stanley Ostern. We now share six grandchildren. 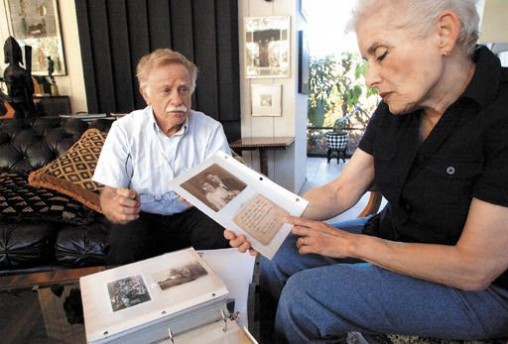