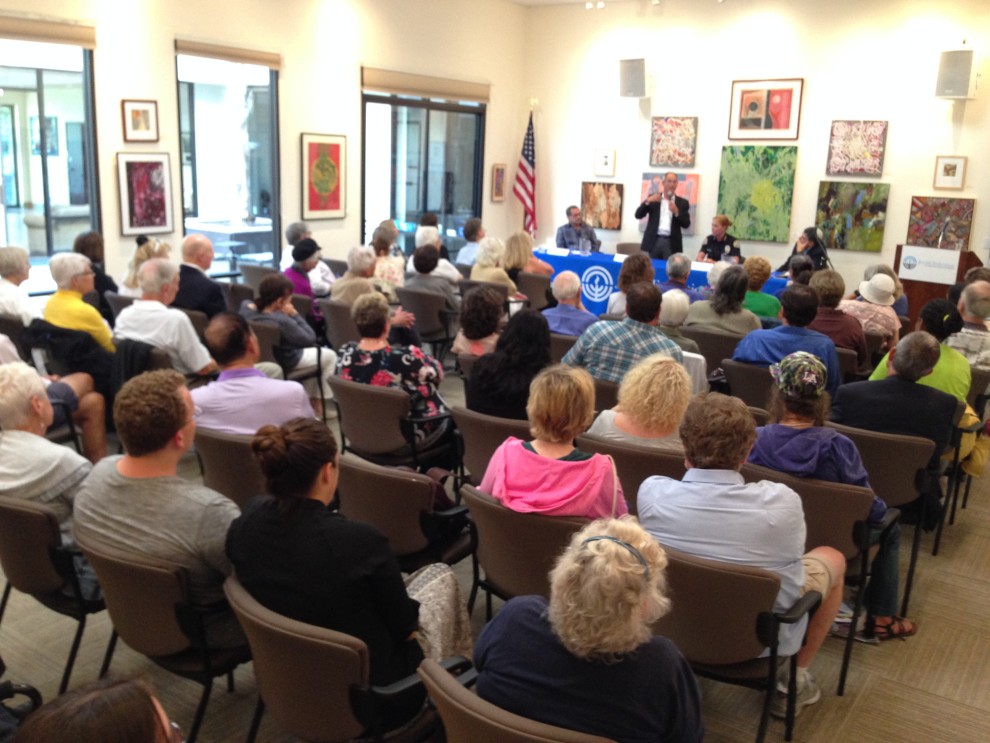 On Thursday, August 18th, the Jewish Federation and its Jewish Family Service Department led a community conversation to speak about troubling local, national, and international events and to ask questions about terrorism, attacks on Israel and Israelis, the Black Lives Matter movement, homelessness, mental health, and more.

The conversation opened with a D’Vor Torah by Rabbi Gross-Schaefer followed by Ruth Steinberg’s explanation of Tikkun Olam (repairing the world) and its key role in Judaism. Chief of Police Luhnow introduced herself and asked the community about their top concerns, which included homelessness, mental health, and crime. Chief Luhnow spoke about her focus on community policing to engage Santa Barbara residents, her plans to increase officer staffing, provide training on implicit bias, and create a homeless outreach team.

Rabbi Cohen recommended disconnecting from television and 24/7 news that focus on the negative, and try to appreciate the good that goes on in our community and our world everyday. He also spoke about the difference in opinion between those who have been to Israel and those who have not. He said that those who have been to Israel realize that it is a diverse, vibrant, and beautiful country, not a dangerous war-zone as portrayed by the media. Rabbi Gross-Schaefer talked about his community outreach work in LA and Santa Barbara, and the need to engage with diverse groups to build bridges and mutual understanding. Howard Cohen closed the evening by speaking about the importance of sharing feelings and concerns before they affect one’s physical health, and described the various programs and support offered by Jewish Family Service. He welcomed anyone to contact him for more information.

The community conversation concluded with an overwhelming call for similar discussions in the new future, which the Jewish Federation agreed to organize.