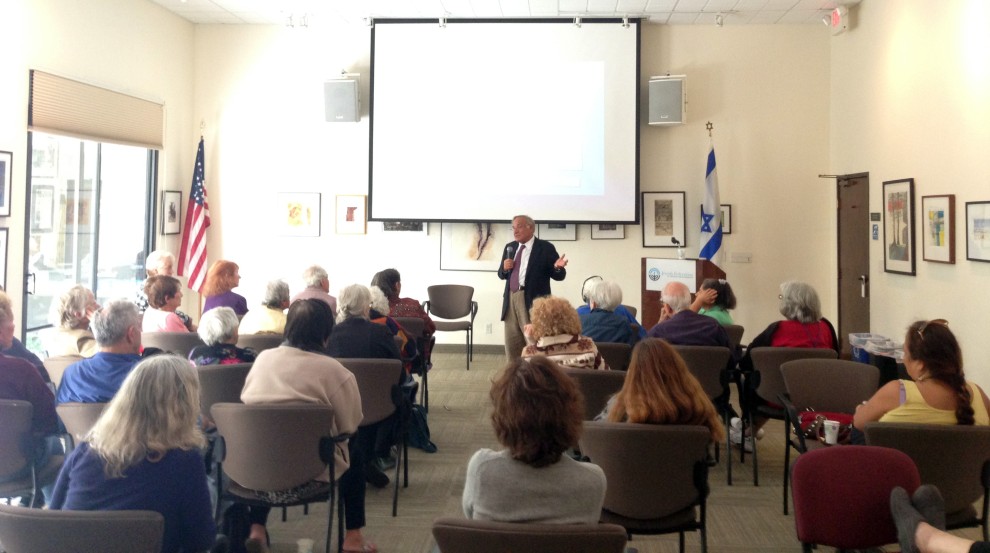 At the Jewish Federation's May Matinee at the J, we viewed the Adizes family's documentary movie, I Want to Remember, He Wants to Forget. Following the film, we had the rare opportunity to speak with Dr. Ichak Adizes, who is featured in our permanent Portraits of Survival and Upstanders Exhibit.

The movie was incredibly moving, but to also hear Ichak speak and connect important insights and ironies throughout his many vast travels and life experiences, was among the most impactful lectures and stories ever told at the Jewish Federation.

For instance, Ichak speaks Ladino, a Sephardic Jewish Spanish language handed down by generations of his family. Someone recognized his dialect at a lecture in Mexico, as "the Spanish spoken deep in the countryside," which allowed Ichak to discover a hidden Jewish community. Ichak also shared a story from when his family moved to Israel and lived in a home abandoned by Palestinians. Some 20 years later in college in New York, Ichak was playing some Middle Eastern Arabic music on his accordion and became friends with a few Palestinians. It just so happened that one of his new friends had lived in the exact home that the Adizes family moved in to in 1948.

Dr. Ichak Adizes is widely acknowledged as one of the world's leading management experts. Over the course of more than 40 years, he has developed and refined a proprietary methodology that enables corporations, governments, and complex organizations to accomplish exceptional results and manage accelerated change without destructive conflicts. Leadership Excellence Journal named him one of the Top 30 Thought Leaders in the United States, and Executive Excellence Journal put him on their list of the Top 30 Consultants in America.

Dr. Adizes is founder and president of the Adizes Institute, based in Santa Barbara, California, an international consulting company that applies the Adizes Methodology for clients in the public and private sectors. The Adizes Institute has been ranked as one of the top ten consulting organizations in the United States by Leadership Excellence Journal. ​

I Want to Remember, He Wants to Forget

Synopsis: Fifty years ago in Skopje, Macedonia, Solomon Adizes and his son Ichak were sent by the Italians and Bulgarians to a concentration camp. Disguised as Muslims, they managed to escape to Albania, where they found sanctuary with Muslim villagers. Solomon pretended to be a doctor and earned a reputation throughout the entire region. After the war, they returned to Yugoslavia and from there immigrated to Israel. Fifty years later Professor Ichak Adizes and his father Solomon return to the concentration camp in the heart of Skopje, and from there back to Albania to meet the family that saved them from the Nazis...