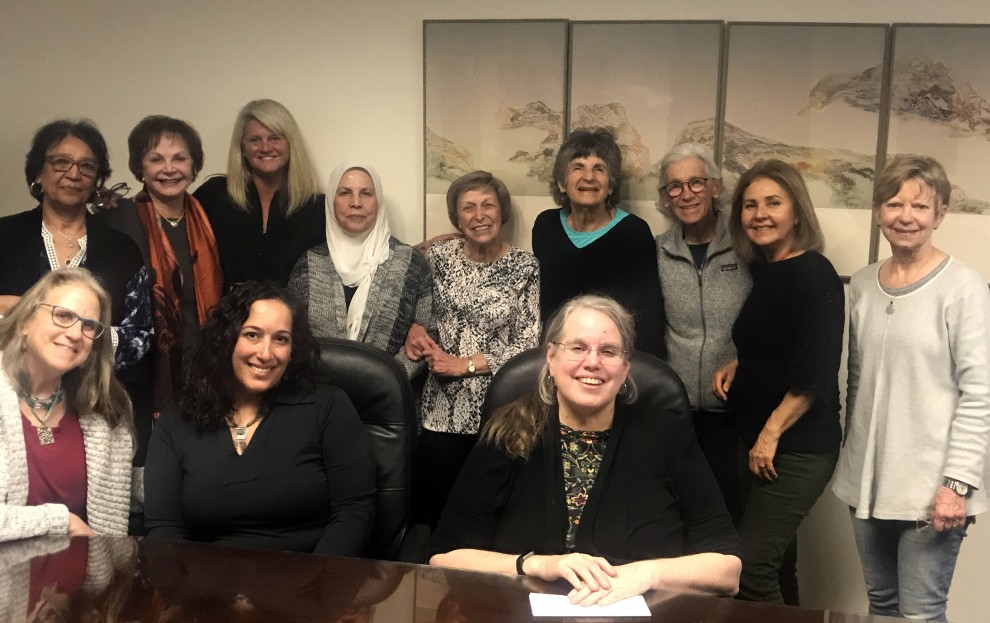 On Monday, February 10, a group of Jewish, Christian, and Muslim women from Santa Barbara, known as the Daughters of Abraham, gathered to learn about the Holocaust first-hand from local survivor Regine Pringle.

Founded three years ago by Santa Barbara resident Sissy Taran, the local chapter of Daughters of Abraham comprises 15 members: 5 Jewish, 5 Christian, and 5 Muslim women. The group meets monthly and alternates between book discussions and social gatherings. Daughters of Abraham, a national organization, was created in response to the events of September 11, 2001 by and for women of the three Abrahamic faiths, Judaism, Christianity, and Islam. The women learn about one another’s religions, and by so doing they come to know one another as members of a unique community of friends.

Sissy was inspired to begin the local group after attending a conference in Boston where she participated in multiple workshops about interfaith relationships and first learned about Daughters of Abraham. As an active member of the Santa Barbara Jewish community, Sissy strongly felt that she “didn’t want to die without having a Muslim friend.” These 15 women have become very close and share the motto, “we are like a lemon: if you peel us back, we are identical.”

The group’s most recent meeting took place at the Jewish Federation’s Bronfman Family Jewish Community Center in downtown Santa Barbara on the Jewish holiday of Tu B’Shevat, the birthday of the trees. The meeting’s date coinciding with the holiday was by chance, but the group took the occasion to study some text, hear a story about the holiday, and eat traditional holiday foods of dried fruit and nuts.

Then, Regine Pringle, a survivor of a French Concentration Camp, shared her story as well as photos of her family whom she’d lost in the Holocaust, and places where she lived during World War II, including the path of her escape from France over the Pyrenees mountains into Spain, then Portugal, and finally to the U.S.

“To me, the experience of the Holocaust…I can feel it – the pain, the agony, the separation.  People from all generations, suffer. This has to be an experience not just for Jewish people – but a human experience, so it never happens again.”

“I went to Dachau when I was 21 years old and I found it to be a horrifying experience.

But tonight, was in many ways more revealing and more meaningful, because of Regine’s beautiful story of survival. The incredible gratitude she has for those who were willing to help her is so inspiring.”

“The inspiration for tonight crossed all human boundaries – interfaith, interracial, as well as issues of age, gender, ideologies, culture – because we all became children of one God tonight. The silence of the room let everyone’s emotions enter their hearts.”

The group of 15 women would like to encourage other women to create their own Daughters of Abraham groups. For more information, visit: http://daughtersofabraham.com.