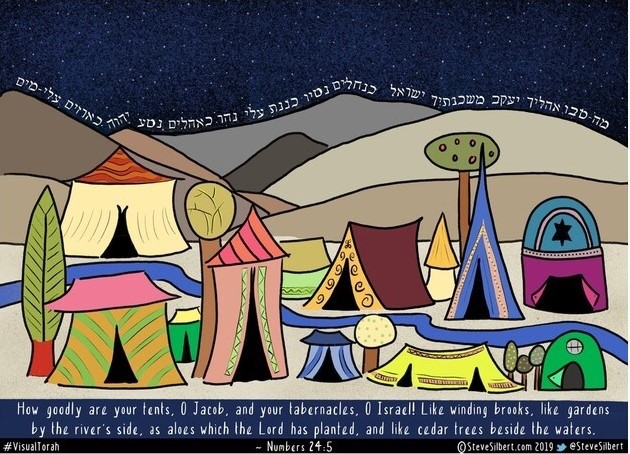 – From the daily morning prayer service and this week’s Torah portion (Numbers 24:5)

Under the full moon of Tammuz – did you see it last night?! It was beautiful!! – we once again welcome the Sabbath, always giving us a chance to step back and evaluate our lives. No matter how you choose to observe the Sabbath, it is truly a gift from our tradition to try and make a difference from the rest of the week – to do less, to be in touch with nature, to notice personal and interpersonal needs more. A weekly refresh and re-start. Raised in an observant Jewish home, I wasn’t always given a choice about Sabbath, but very soon saw the value in this special day. Like an artist who steps back from the canvas of their work, the perspective is necessary for the ultimate truth in the result. Often, our Torah and the wisdom of those who came before us can inform our current journey, helping us navigate the seas of our lives. While it is true that much of what we read in our Bible belongs to a very different time, the teachings can be so relevant to what we are all facing right now in this time and place, and thus so timeless in their value.

At Jewish summer camp – first as a camper, then as staff, and finally for many years as a Jewish educator – we looked forward to the wild and comedic Torah portion we read this week, with a talking donkey (Shrek, anyone?!) and a psychic prophet for hire! And, no, I’m not kidding, the basis for the loveable talking donkey in the movie Shrek allegedly did come from this week’s Torah portion called “Balak,” named for the Moabite king, who hires a prophet named Baalam to curse the Jews, who are growing in numbers and he sees as a threat to him. But try as he might to curse the Jewish people encamped nearby in the desert in their tent community, he just can’t seem to do it. He tries three times to do what he is hired for by the king – and even after abusing his donkey, who then also gives him a tongue-lashing – when overlooking the Israelite camp, out comes the now famous blessing for the people, instead of the hoped for curse: “How goodly are your tents, O Jacob, Your dwelling places, O Israel!”

But what does this blessing really mean – why has it become so central in our tradition and what can we learn from it? It seems that we can learn something both from the words themselves which escaped from the lips of Baalam, as well as the very act of blessing the people. Our sages teach us that it was not the tents themselves which were noteworthy, but the way the Israelite camp was arranged which was worthy of blessing. The tents were open to strangers and those in need, and while they were close together, the openings were set up to allow for privacy – all these things pointed to the morals and ethics of the people, and the community they had chosen to create. We also learn from the act of blessing itself: it may be easier at times to express anger or frustration, to curse another person and to assume the worst from that individual, but when we can choose, we must choose kindness, blessing – and seeking the good in the other. For these are the things which will bring us a richer, kinder community. And when the rabbis decided to use these words for our first prayer in the morning service, it was to firmly establish this blessing of seeking goodness for our communities.

This discussion reminds me of the famous Talmudic legend often referred to as “Torah on One Foot.” Rabbi Hillel, the great Talmudic sage, was born in Babylonia in the first century BCE. He was humble and patient, seeking to bring all of the Divine’s creations closer to the Torah. He is often mentioned with Rabbi Shammai, who had a stricter approach to Torah law and with whom he often disagreed – Hillel’s opinion usually won out. Once, a man sought advice from Shammai, saying that he wanted to learn the whole Torah while standing on one foot, upon which Shammai promptly threw him out of his house. The man then went to Hillel, who told him what is now the famous line: “What is hateful to you, do not do to your neighbor. That is the whole Torah; the rest is the explanation of this – now, go and learn it.” Of course, Hillel was quoting the line we all know from the book of Leviticus: “Love your neighbor as yourself.” Imagine the community and world we could create if we all treated others the way we want to be treated.

Finally, an interesting side note: For some observant Jews, this Sunday is a significant day on the Jewish calendar called Shiva Asar b’Tammuz – The 17th Day of Tammuz. Often called a minor fast with major history, this day begins a three-week mourning period culminating with Tisha B’Av (the 9th of Av) coming next month. Some Jews will observe a “half fast,” abstaining from eating and drinking from dawn until sundown, marking a number of historical tragedies, foremost among them, the breach of the walls of Jerusalem by the Romans before the Second Temple’s destruction. These important days connect us to our past and our history.

Wishing you a Shabbat Shalom – a Sabbath of peace – with blessings for us and our community,

Photo caption: In this artistic work of the well-known Biblical prayer quoted above, we see a representation of the tents of the people of Israel: close together, yet mindful of each other’s privacy; diverse, yet open and welcoming to all, protecting those in need.